Now that I am studying, I can only realistically devote a couple of hours each week to writing here and last week, I prioritised writing a Christmas letter instead.

I like to write long newsy letters to friends and family abroad at Christmas time and I usually spend considerable periods of time writing them; in coffee shops and at home (accompanied by Christmas tunes to get me in the mood!) Most letters are around four A4 pages long, some more. I started this in my twenties, when I was a prolific letter writer. I have always enjoyed letter writing as a chance to connect and “spend time” with friends who I rarely see. As you can probably imagine, this is rather time consuming, so this year with my study schedule going right up to the 19th December, I decided to handwrite a long “round robin”-style letter instead. It is eight A4 pages long!

Anyone who has visited my blog, will know that I always have a lot to say 😉

There is a lot to recount after a year has passed and I have tried to make the letter as personal as possible, considering it will reach over 25 recipients. I plan to photocopy it onto colourful paper and write a personal message in a Christmas card with a photo of the girls. Hopefully it will be well received.

I don’t usually send a photo of us parents as we don’t change too much from year to year (and besides I don’t even think I have one of the four of us!!) I really should try to get one taken as we now sponsor a little girl in India and I think it would be nice for her to have a photo of our whole family. We sponsored a girl in Africa until she reached sixteen this year, when the sponsorship had to end – Jebbeh received a lot of photos over the years!!

In preparation for Advent and Christmas, I have been looking through all my Christmas books, magazines and my brown leather-bound book, in which I have written all our family traditions. I love spending time preparing for Advent and setting an intention for a peaceful, special time. I have made a few plans for crafting and baking and arranged a couple of family outings, but am trying to keep things relatively simple as energies are low at this time of year.  There is still a lot going on at school until 13th December (when we break up – nice and early, thank goodness!

Our Christmas Fayre is this weekend. My eldest has continued to work on the pretty things that she will sell on her stall in the Children’s market. She has finished her doll skirts, angels and small window stars and this weekend she needle felted some more baubles

Some of these are her sisters, but she is happy to sell them for her.

My youngest treated herself to an elf costume with some money left over from her Birthday. I think the girls are planning to do another Christmas play for us. Here they both are with their “elving” 🙂 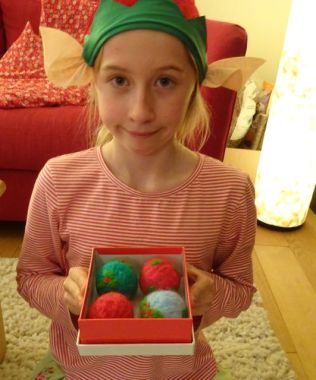 The temperatures here have plummeted to 6 C and we even had ice on our pond.

It has been so mild this autumn, it feels good to have colder weather in the lead up to Advent and I am sure our Christmas Fayre this weekend will put us further in the mood.

I am treating us to the Jacquie Lawson Electronic Advent Calendar again this year. It is so beautiful and my daughters look forward to it year after year. Originally a grandmother at our school treated us to one every year, which we so appreciated, but as she died last autumn, I have taken it upon myself to treat her grandchildren and some of my lovely friends’ children to keep up the tradition. 🙂

One of my greatest joys in autumn and winter is to experience the sunrise and sunset – both of which are during our waking hours. The sun rises after seven now and sets around 4.15pm. We often gasp at the wonderful colours as we drive home from school; ranging from vibrant fiery reds and oranges to soft pastel pinks and blues. It is a real joy to experience such beauty in nature – it fills us with much needed reverence. 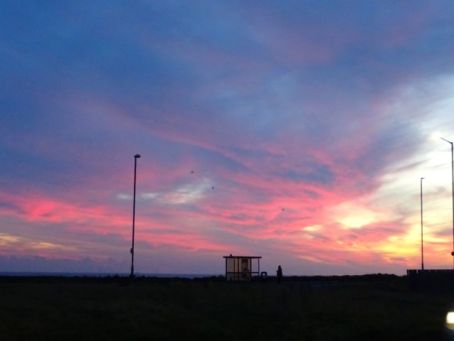 Another moment of reverence the other day was peering in at our home from the outside. I had just been in our studio and it was raining and windy outside. As I looked towards our warm, cosy and colourful home, I felt such deep gratitude for this shelter; this refuge from the cold and rain and the outside world.

I was walking around our City the other day and I was struck at how many homeless people there are. I always am in the winter months – it must be so tough on them, huddled in doorways in the cold, watching everyone hurrying by, doing their Christmas shopping and seeing people sitting in warm comfortable cafes. I am often considering ways to help. I plan to contribute some funds so that a few people can spend the festive season at one of the Crisis centres – a fantastic organisation that helps bring humanity and hope to the homeless. We are also planning to give a big box of food to one of the soup kitchens, who feed the homeless in the evenings. Sometimes I give a few pounds to individuals, but it never feels like it’s enough. The government needs to do something – this needs bigger solutions than I am able to offer….but I can send them my prayers, love and hope. That is what I shall do…. and make sure I always return a smile.

I have been enjoying studying a couple of hours each day (but not on weekends). I recently spoke with a friend (and mentor) about how I struggle with concentrating for long periods of time and how, after my long day of lectures, I had craved using my hands to craft and relax my tired brain.  My friend had a really great suggestion for me!  She informed me that the brain is only able to receive information for 45 minutes at a time before it needs a break, so she suggested I study for 45 minutes – putting a timer on – and then craft or do something I enjoy for 15 minutes – again using a timer – before returning to my studies and repeating this as often as I have time for.  It is WONDERFUL!!! I enjoy the study and love the break. This week, I had time to fold lots of kite paper so I can make small window stars to include in some of my Christmas letters. Such joy 🙂

I also finished knitting an Infinity Cowl for my youngest that has been sitting on the needles for far to long and it now very much needed!

and last week I made some lantern “children”.

Although Martinmas itself had long passed, I still felt that the Nature Table by our dining table would be enhanced by some lantern “children” 🙂 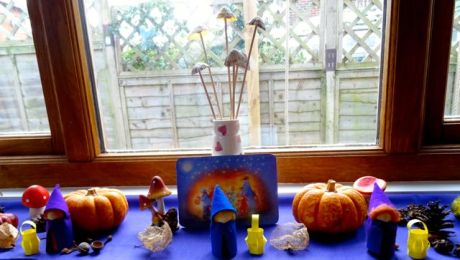 Besides, our school lantern walk only took place last Friday (due to staff illness on two other occasions), so lanterns are still very much current here! 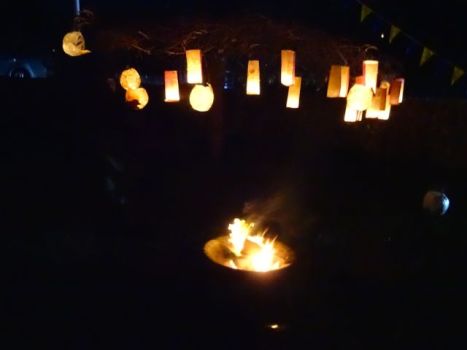 I made them using peg dolls that I have had for ages. I just cut out some felt to fit the doll and glued it on with a hot glue gun (as I didn’t have high tack glue and PVA glue doesn’t work on felt). I also cut out some felt for a cape and hood. I sewed the hat together along the top using blanket stitch and then attached the hood to the cape with a running stitch. leaving two long ends on either side that I pulled together and tied at the front. The woollen hair was stuck on with hot glue, but I think a high tack glue would have been better. We gave the children a shorter hair do as the longer hair didn’t show and was bulky underneath. 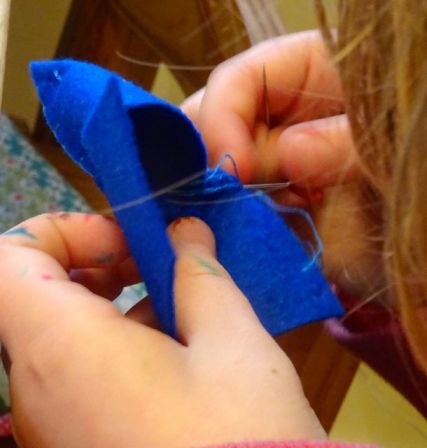 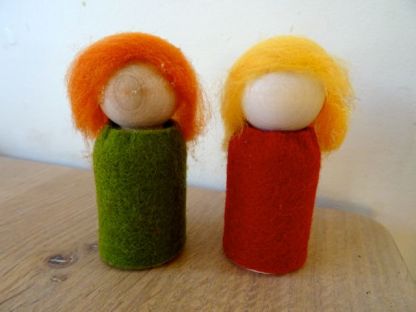 My daughters liked them so much that they both made one for their own Nature Tables in their rooms 🙂 It feels good to add something new to the Nature Table every season. We have quite a collection!!

It is such a joy to make time to craft. I make sure I have the materials at hand so whenever I take a break from study, I don’t need to go anywhere (except to make a cup of tea!) and it makes the experience very enjoyable. I highly recommend it!

On the subject of joy and gratitude, we just recently received a new recyling bin. I know it doesn’t sound too thrilling, but it has made me so happy to be able to finally recycle plastic packaging (including fruit punnets, yoghurt pots, bottle tops etc). Until now, we have only been able to recycle glass, cardboard, paper, tin cans and plastic bottles and it has really bothered me not having anywhere to recycle all the other plastic. Friends and family in London have been able to recycle these for a while, so on my trips to visit them, I have sometimes been known to bring a big bag of plastic containers with me! (yes I really do!) I have also taken plastic lids with me to France to recycle!!!

Germany is amazing with its recycling. You can recycle pretty much everything which is astounding and I hope the way we will be heading.  Ideally I would prefer less packaging all round and we often have a fruit/veg box delivered in the winter months to help cut things down (and it has been a way to recycle the plastic punnets).

So right now I am feeling grateful for a lot of things, small things really, but they all add up, I find.

There is always much to be grateful for if we look for it, isn’t there? 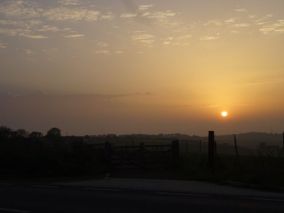 Joining the crafty folks at Frontier Dreams Crafting On