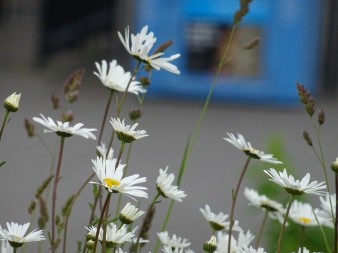 Early last Saturday morning, my youngest daughter had to have two teeth removed under sedation 😦  She has had two poorly teeth on and off for almost a year. We have been able to keep infections under control using homeopathy, (so we didn’t have to resort to antibiotic use), but unfortunately the teeth were very weak due to my daughter grinding them at night (what a horrible sound!), so infections have kept returning with the ensuing pain…poor poppet. We were also advised that her next teeth could suffer if she keeps having recurring infections, so this weekend my daughter and I bravely went to have her teeth taken out.

Despite it being rather stressful, when they couldn’t find my daughters vein on the back of her hand (she still has lovely chubby hands…), the actual treatment was over in less than five minutes. So quick – not even time to get out my knitting – not that my trembling hands could have really knitted anything! She was drowsy for a little while and was sick in the car on the way home, but generally it was a good experience. Unfortunately they wouldn’t let us take the teeth home for the tooth fairy, as they were so decayed 😦 This really upset my daughter, so the surgery gave her a special picture to colour in, so the tooth fairy would know how brave she had been. Of course the tooth fairy paid a visit and the next morning my daughter was delighted to find two lovely crystals and a couple shiny coins.

We were told that she should rest at home for at least 24 hours, so we brought down her duvet cover so she could lie on the sofa and watch a favourite film. By the afternoon she was pretty much back to normal; playing with her sister.

We spent a quiet Sunday at home too. It felt very restorative just being at home for a a couple of days. There was time to do some weeding and general tidying in the garden and I finally got around to sewing the flower children I mentioned here. I also started knitting the cardigan that I am planning to make for my youngest daughter’s birthday – in 11 days time – the countdown has begun!

I am not too sure whether I will finish it in time. Let’s see. I have other projects to make for her birthday, so whatever gets done, will be her present. I am staying optimistic but not putting myself under pressure. The cardigan is loosely based on this pattern. I have been following the instructions for the yoke up to the sleeves, but won’t be doing any more lace detailing as my daughter wants the rest to be plain, apart from the diamonds on the yoke. I knitted her a little short sleeved cardigan in the same colour, with a very similar pattern on the yoke, when she was four years old (that she wore until she was six, even though it was very short by then). It was a favourite and since I can’t find the pattern again, I searched ravelry for the closest option. My concentration isn’t too great at the moment, so I am grateful for not having to do the diamond pattern throughout as I even struggled with copying the pattern on the yoke!! It will be short sleeved like the original version, so that will speed up the process. Wish me luck!!

The girls also really enjoyed a whole Sunday at home with plenty of time for imaginative play. The weather was glorious and they set up their own version of what they experienced on our visit to Batemans last weekend:

There was face painting,

a cafe with home made food,

and an open air gift shop.

Naturally, my husband and I visited and enjoyed the ‘full treatment’! Later on, the girls set up a craft corner too, making hairbands. It was very sweet. I think half the fun with these kinds of things is the set up. The girls enjoyed putting it all together almost as much as playing.

During this time, my eldest took time out to make a turtle out of a coconut shell and papier mache with my husband.

It has since been painted and varnished. 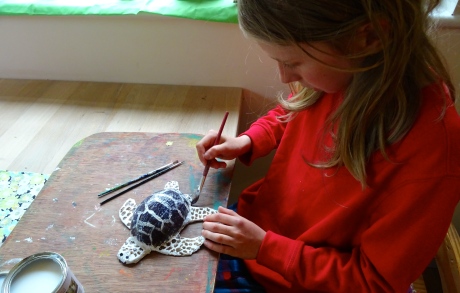 She is in the fourth grade and this is the first school project she has undertaken, at 10 years of age. The current main lesson theme is “Man and Animal” and each child has chosen an animal to write about. My daughter chose the green sea turtle (after reading about it in this wonderful resource – thanks Helen!). The project involves writing several pages on a chosen animal, writing a short poem, designing an A3 poster and making a model of the animal. 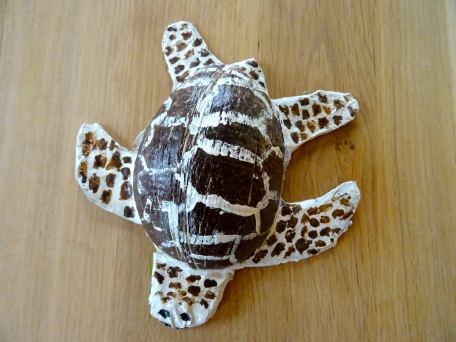 These will be displayed for other students to see. They then present their project to the class and take questions. My daughter did her presentation today and says she really enjoyed it and it went really well 🙂 My daughter is quite shy by nature and needs a safe space to flourish, without any pressure to perform. I feel so grateful for our school; that it has allowed her to have the confidence to proudly stand in front of her class and explain her project. That sort of thing used to petrify me at school!! Waldorf education at its best allows the individual to find their voice and to be proud of their own work. It is so helpful for the class to have the same teacher over many years as it allows the teacher to know each pupil deeply. My daughter’s class may have some challenges, but they do encourage each others work and work cooperatively.

Onto birthday crafts….as I mentioned my youngest daughter’s birthday is only eleven days away!  She has requested I make her a dress rather than a skirt this year. I have had the Geranium pattern for several years, hoping to make a dress for my girls, but they only ever wanted me to make them skirts for a long while. Finally I am getting a chance to get a sew a dress! My youngest suffers from tummy aches and doesn’t like her clothes to be too tight, so she has been wearing pinafores and dresses a lot more lately 😦  This dress looked nice and loose and flowing around the tummy, so we are hoping it will be a favourite. 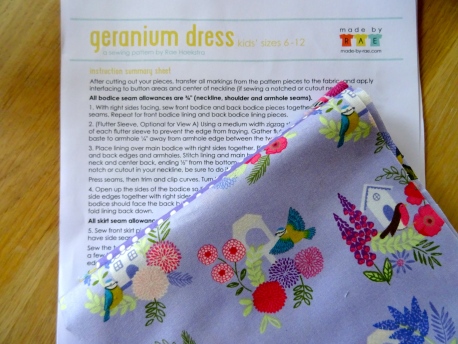 I allow my daughters to choose the yarn and fabric when I make their garments as they have very specific ideas about what they do and don’t like. We went to a lot of fabric shops before finally deciding on this gorgeous fabric. It is called “Grandmother’s Garden” and I think it’s a really lovely choice. When choosing fabric or yarn, I explain to my daughters that I too need to like it, as I will be spending time working with it. This makes it a bit challenging to find something we both like and it certainly narrows down the choices (!), but we always get there in the end 🙂

I am also making her another crayon roll as her teacher has been giving them a lot of crayons this year – much more than my eldest had at this point – and the one I made her in September is too small now, so she is going to use it at home instead. I love the fabric she has chosen and will enjoy working with it and following my own tutorial – so handy that I wrote one and know where to find it !!! 🙂

When I was at Ikea last week, I bought my youngest a little wooden doll’s bed. I got her sister one from a charity shop years ago and we found her a little moses basket, but lately she has been hinting that the moses basket just isn’t up to scratch anymore (!) and I haven’t managed to locate another bed anywhere, so whilst I was in Ikea I remembered her wish and treated her to one for her birthday. I am glueing on some floral material onto the bottom to make it look pretty and making a red and white spotty duvet and pillow set (with material that I already have).

Hopefully it will be a nice surprise for her. Then her Phoebe mouse finally has a proper bed like her sisters 🙂

The costumes are coming along well. I still have the gloves to work on and the ears, but the skirt, waistcoat and tails are done. I am going to use a press stud to attach the tail to the skirt I think.

That’s all my news for now. Looks like I will be doing plenty of crafting in the next week or so, not to mention having to think up some kind of cat-themed crafts for the party….It’s my favourite kind of busy 🙂

Wishing you all a happy Friday and a peaceful, enjoyable weekend.

Joining Nicole for Crafting On

7 thoughts on “Crafting and time at home.”