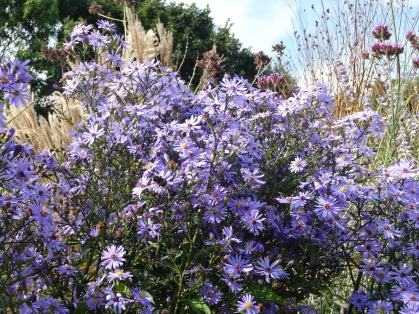 Michaelmas festival takes place on 29th September each year and it is one of the many  seasonal festivals that we celebrate at our Steiner (Waldorf) school. It is the first of three autumn/winter festivals (Michaelmas, Martinmas and Advent) which culminate in the celebration of the birth of Jesus on Christmas Day.

The autumn equinox has just passed and slowly the balance between darkness and light is changing as we head into the darker months and the process of death and decay in nature has begun as we bid a final farewell to summer.  It is harvest time and farmers and gardeners work hard to bring crops in and finish their work in the fields/ putting beds to rest in preparation for the winter months. Harvest festivals are celebrated throughout the Northern Hemisphere to mark this.  Although we can now buy any food we wish at any time of the year, it is fitting to thank our earth for its bountiful gifts and to make space for gratitude.

It is also a busy time in nature with animals gathering their winter stores and birds preparing to migrate.

Michaelmas has traditionally been the time of new beginnings and taking up new tasks. It is for this reason, that the University term begins at this time and it was traditional in olden times to renew work and rental contracts at Michaelmas.

Archangel Michael is the mightiest of all the Archangels in God’s Heavenly Court and the leader of God’s army. He stands for truth, goodness, courage and fortitude. It was he who fought Lucifer (another mighty Archangel) and cast him out of heaven when he became deluded with vanity, pride and a desire to usurp God. He was cast down onto the earth and became Satan (the devil).

In English folklore it is thought that he landed in a thorny blackberry bush and in his anger he spat upon the bush and cursed its fruit, so it is recommended not to pick blackberries after Michaelmas ( that’s the end of my foraging!)

Archangel Michael or Saint Michael is venerated in both Judaism and Christianity and he is also mentioned in the Qu’ran. He is the most powerful of the Archangels and many churches throughout the Christian world have been dedicated to him (including Mont St Michel in France which we visited this summer). Iconic paintings of Michael typically show him on a white steed holding a sword and a shield, gazing forwards whilst holding the dragon at bay at his feet. We can note that he does not kill the dragon but rather subdues him; his gaze is not on what he is trying to overcome (the darkness), instead he is looking towards the light. He is also shown with scales on many statues, as he is the Archangel that comes to the dying to weigh up their souls and give them a chance to redeem themselves. Greater detail can be found here and here.

So how does Michaelmas serve us?

In the summer months we are at one with nature. The sun gives us warmth, energy  and plenty of long light-filled days. Life feels like a lighter experience and our spirits are permeated with this warmth and light and all around us is abundant. The challenge now as the days grow shorter, is to step away from nature (and darkness) and make it a priority to take the light into ourselves; to kindle our inner light and to harness the energy we have absorbed from the sun to give us strength for the darker days ahead.  Michaelmas is the ideal time to shine a light on our inner dragons (human weaknesses such as uncertainty, fear and doubt) and to cultivate the inner strength and courage to conquer these and to strive for self awareness. If we nurture our inner light, when the dragon rears its head -or insecurities creep in – we are self aware enough to keep these feelings in check and to face the future without fear. We can call on Archangel Michael to help us summon our inner strength and resolve to stay on the path of goodness, truth and light.

Stories of good versus evil or light versus dark are often told at this time.  One such story is St George and the Dragon. The image of St.George taming or slaying the dragon represents our inner courage to face our fears.

The colour red is associated with this festival, echoing the berry reds out in nature,  the rosy apples and the fiery colours of the turning leaves. In more anthroposophical circles, red is the colour of blood which is thought to be the carrier of the ego (our spirit self) and we need this ego power to keep our dragons at bay. Blood is also the carrier of iron and the shooting stars at this time of year are iron falling upon the earth to give us strength. Michael’s sword is also of steel as is his steely determination to conquer the dragon.

Young children do not need to know the history behind the festival to enjoy it. We can present them with images of hard working blacksmiths with their iron, animals gathering their winter stores, mice making their nests and hedgehogs preparing for their winter sleep. Stories of courage and fortitude for older children all create the mood of the festival without going into detail.

How do we celebrate Michaelmas in our school?

This year both my daughters are in the main school. Parents do not attend main school festivals, but I am told the day started with a Michaelmas assembly with the children all dressed in red to reflect the spirit of the festival. During the morning, the children were divided into groups and were assigned various tasks to help prepare the school and grounds for the winter months. using their will forces for the good of the school. My eldest daughter did some dusting and cleaned the banisters whilst my youngest did some weeding outside. When I arrived to pick my youngest up, there was a marked difference I found: the energy really seemed to have been lifted by the communal effort. The children were rewarded with a harvest feast made by the ninth grade class (14-15 year olds) and there was even an entertaining performance of St George and the Dragon by the children of the tenth grade class. From what I have heard, it was a rewarding, enjoyable day for all.

In autumn Saint Michael with sword and with shield

passes over meadow and orchards and fields

He’s on his way to battle against darkness and strife.

He is the heavenly warrior, protector of life.

This is the Michaelmas song that both my daughters sing at school ( there are others for the older ones). They have been singing it every day at home and it really seems to resonate with them.

I was lucky enough to attend the Early Years festival (as I am now volunteering to contribute to our school news sheet). I have attended these festivals for eight years so I feel quite at home there! The families all wore dark berry red to suit the mood of the season.The children were asked to walk to school if possible and to pick up some treasures on their way ( leaves, conkers, feathers, stones etc.) which were carefully laid into a spiral shape for all to admire. 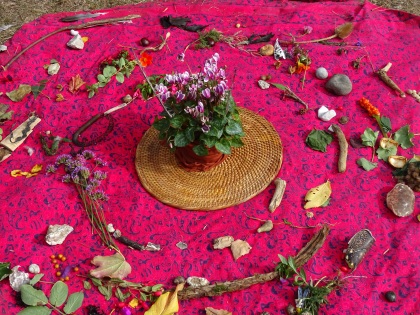 There was a harvest table, including bread windmills, harvest sheaves, a giant mouse and many little mice (think the song ” a mouse lived in a windmill” which we later sang ) and of course a Michaelmas dragon. So plenty of imagery there! 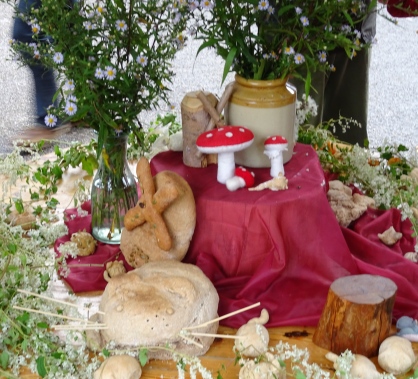 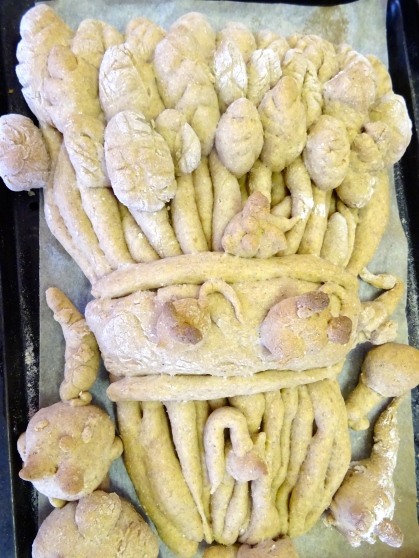 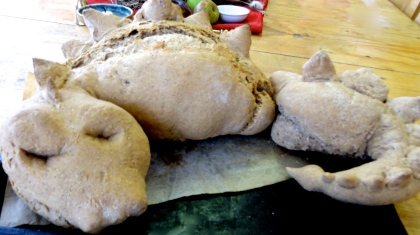 The families then shared a festive brunch and sang some wonderful seasonal songs , including my two favourites ” Yellow the Bracken” and “I am a Blacksmith good and true” and the Michaelmas song “The Autumn Winds blow open the gate” ( all found in this book). In the spirit of gratitude, the families also brought donations of food for a local charity. 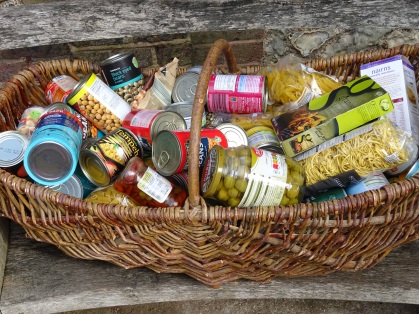 At home, we made a small corner for St Michael ( or St George – the red cross knight) on our nature table. I made the dragon from this pattern some years ago. I always fantasised about getting an Ostheimer Saint Michael, but there are always so many expenses at this time of year, I make do with a doll’s house boy on a white Schleich horse 🙂 . 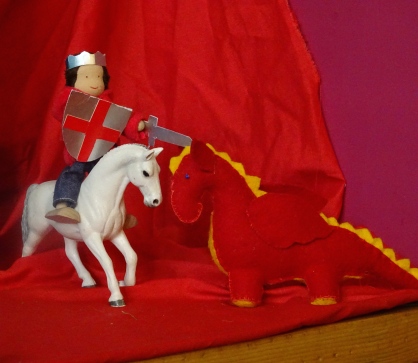 And I brought out our Michaelmas candle which has had much use over the years  (the idea was found in All Year Round – a wonderful resource for all things Waldorf/seasonal). 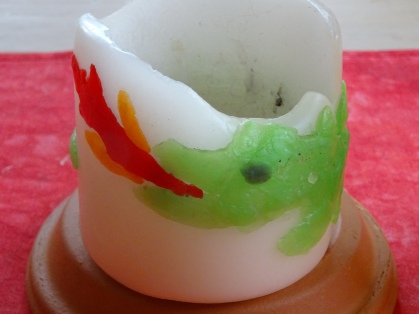 My youngest daughter made a ‘dragon catcher’ in her class which she has had fun playing with and my eldest made one at home later that day with some instructions from her sister. I will share a simple tutorial with you tomorrow since I haven’t found it anywhere online and the girls love it. 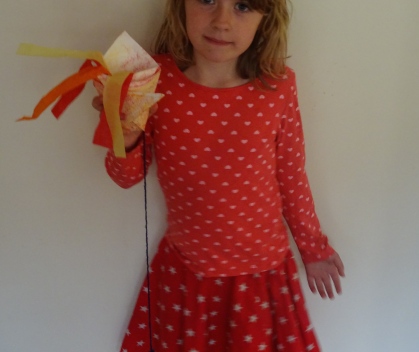 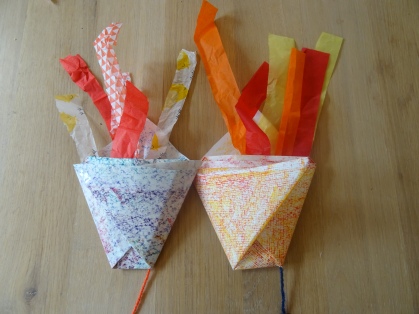 It is rather a long post but there is a lot to say, but hopefully the spirit of the festival is clear and it is helpful to know more about why we celebrate Michaelmas :-).

I like to write about the festivals here as it helps me clarify the meanings behind them  to myself and hopefully it will do the same for others of you out there. There is certainly a lot more that could be said, but I wanted to keep it simple!